GAME: a board game co-designed by clients at the Psychosis Therapy Project

Not every game has a ball, nor two competing teams; even, sometimes, there is no notion of “winning.” Marvin Minsky, in reference to Wittgenstein’s Philosophical Investigations (1980)

This collaboration was part of a PhD project aimed at understanding the design process and the experiences of participants, clients of the Psychosis Therapy Project, to see if this engagement is beneficial to mental health. The co-design project was not set up with the intention of developing an artefact, and participants were encouraged to engage in the process freely. The process started with activities that aimed to begin to understand and define what design means; for instance by bringing objects and reflecting upon their significance or carrying out short design projects. Through some co-design tools and activities, a broad design purpose emerged, that of expressing a notion of Stewardship, or taking care of, which resulted in the development of GAME.

GAME is a tremendous achievement, stemming from participants unique knowledge and insights on Stewardship, or taking care of, each other and the world, and an intellectual and creative engagement with the meaning and diversity of human experiences.

The board game is designed to encourage collaboration over competition, and the exchange of ideas and perspectives in a non-judgmental way. Some players for instance commented ‘I have shared things I wouldn’t have done otherwise’ or ‘I didn’t know I was so self-conscious’.

Game is designed to help participants wonder, get to know themselves and connect with one another and the en­vironment. There are no winners or losers and interaction among participants is the main bene­fit. To achieve this, the board game involves players in addressing questions that relate to different themes, through different forms of interaction.

Game is composed by a set of cards with questions pertaining to the different themes in different colours, and a board offering 3 different ways to address each card. There is also a set of empty cards where players can write their own questions.

The different themes are: green, philosophical, spiritual, mind & body, cre­ativity and (?) which refers to any area not included in the main themes. 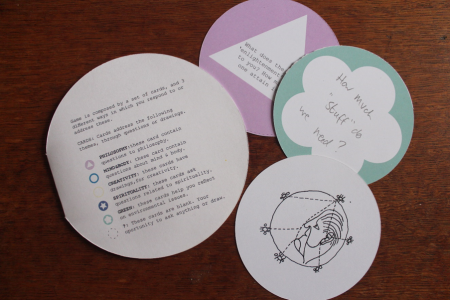 Randomly through a wheel, each question can be addressed in three different ways: Tell & share, Think & discuss, and Act & ask. 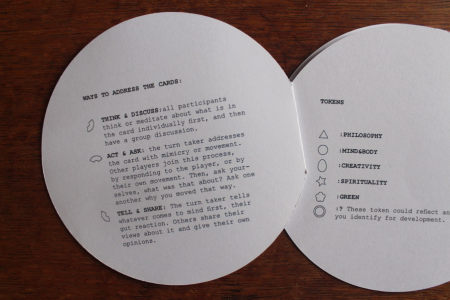 Through sharing opinions, non-judgemental discussions and reflections with others, players may identify areas in which they may want to further reflect and develop themselves, individually or as a group. In order to keep track of these reflections, tokens are distributed among players, which reflect each theme. 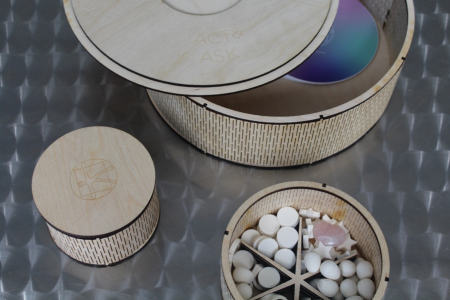 Figure 3. Game, box of cards, board and box with tokens corresponding to each theme.

Unlike most games, tokens are allocated subjectively. Throughout the game, when the player feels they need help with some area (e.g. spirituality), they can take a token as a reminder of this need (e.g. spirituality token). Tokens can also be given by others, if the player accepts them. At the end of the play session, the number of tokens of each type reflects where the player needs development. Rewards corresponding to each theme are given to those who have most tokens of one type, to motivate them to develop that part of themselves. For instance, if you feel you are not very environmentally aware, fellow players could encourage you to take some green corresponding to­kens. At the end of the game, if you have mostly green tokens, you may be given a reward that encourages you to become more environmentally friendly. These rewards could be created ad hoc by the group or selected from a booklet of ideas.

Step by step – with example:

Try it any time at the Despard Road centre – feedback and ideas welcome!

GAME is licensed under a Creative Commons Attribution-NonCommercial-ShareAlike 4.0 International License

Outcome, Islington Mind’s client-led LGBTQ+ service, has been shortlisted for Charity or Non-Profit Organisation of the Year at the British Diversity Awards.

The British Diversity Awards promote the values of equality, diversity and inclusion by rewarding those individuals, organisations and unsung heroes who help to make the world and the workplace a better place for others.